This year`s training started at the honbu with Sensei unveiling his latest art acquisitions. As Sensei often remarks the greatest martial artists are inevitable great painters and proficient in many fields of art. In a recent conversation over lunch, Sensei generously invited my visiting sister and I to lunch, he spoke of how, when he was a young man, he studied with a famous film director in Tokyo and had dreams of becoming a director himself. As well, after the end of World War II, he played the steel guitar in a music band. They were so poor that they had to make their own instruments and play together.
I remember a time, Sensei was not satisfied with the pictures being taken by the photographers for one of his books and decided to take matters into his own hands. He brought in a ladder and a collection of his cameras. Someya San was up on the ladder with the camera and Sensei was giving him a hard time yelling things like, `next increase aperture and decrease shutter speed!` `rotate the camera as you shoot` `time your arms to my movement and move the camera as you shot`. And poor Someya San was having all sorts of trouble trying to keep up. Those photos eventually made it into one of his books. He says he uses all the arts as reference to deepen his study and practice of the martial arts.
Of course we all know that Sensei is a very prolific painter. I watch him on a weekly basis whip out up to 100 pieces of calligraphy in less then thirty minutes as presents for his visiting students. His teacher Takamatsu Sensei was also a brilliant painter. But did you know that Miyamoto Musashi, the swordsman famous for his use of the two swords, was also a great painter? My first introduction to Musashi`s work was thru my 90 year old ink painting teacher who is from the same town as Musashi. Musashi was famous for his Daruma, Hotei and bird paintings among other compositions. He seems to like to create tension with the birds by having them intent on a nearby insect. Either staring at the insect or perched with a patient air as the insect unknowing crawls closer.

Sensei unveiled a copy of one such painting. Here you can see the bird patiently waiting on the branch above. At first glance, you may not notice the tiny caterpillar (which could be mistaken as a leaf or unrelated scribble) crawling his way up the branch. As explained, it is important to look at a scene and see or sense the subtleties or you may miss the whole essence of the situation. In life as well, if you can not sense these small things at a glance, you may end up putting yourself unknowingly in great danger or life threatening situations.
Further Sensei also unveiled at the first few trainings of the new year a great collection of `room dividers` with the beautiful calligraphy of Yamaoka Tesshu. Yamaoka Tesshu was a famous swordsman of Japan know as a Master of the Sword, Zen, and the Brush. He also founded the sword linage the School of No Sword. I truly enjoy spending time in appreciation of their art and often try to copy their works. It is my sincere hope that you too can use these great artists a reference for the deepening or your practice as well. 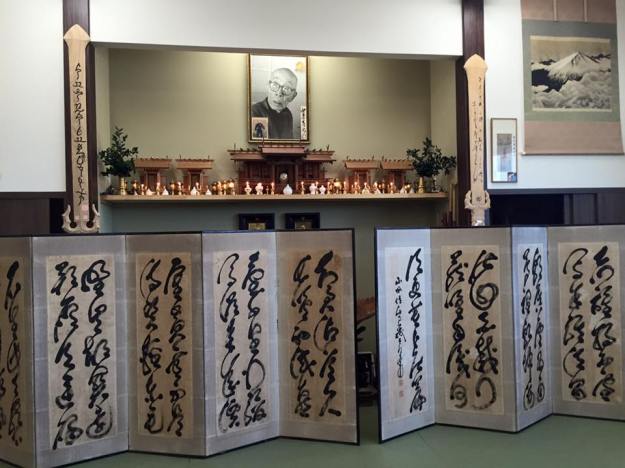 Thank you Doug Wilson for this picture! You may also want to check out this book dedicated to the art of Miyamoto Musashi.

1 thought on “Art for your Happy New Year!”